So what about you? With a flask of tea and 1000 miles to cover, where would you go?

MJ is taking a road trip (you can see her images on Flickr). After 13 hours of driving, she's covered just over 1000 miles from San Francisco to Tuscon in Arizona via Los Angeles, San Diego and Phoenix, on her way to Dallas. Her trip got me thinking about where I could reach if I were to drive 1000 miles.

Living in the middle of a (collection of) island(s) off mainland Europe, my options for driving 1000 miles in any one direction are non-existent. But if I were to head off tomorrow, I would drive north through Northern England, into Scotland and aim for Haroldswick on the Shetland Islands, a distance of some 668 miles.

The route suggested by Google would take me via Kendal and onto Glasgow, Scotland before heading east over to Forfar, then north to Aberdeen and Peterhead, where I would take a boat to the Shetland Islands. There I would drive north on to Haroldswick. 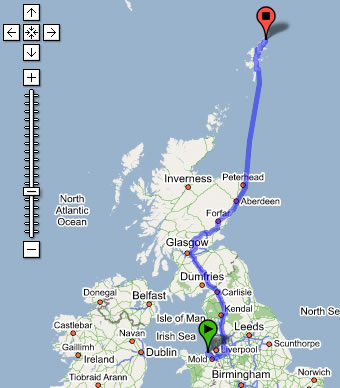 So what about you? With a flask of tea and 1000 miles to cover, where would you go?