Now it's your chance to win one of my fantastic iPod Nano covers, direct from Apple's home in Cupertino.

I love my Nano, I want to keep it close, keep it safe. My Nano is so precious, I can't bear to think of it getting scratched. But as of right now, the only protection I can buy from Apple is an armband, great if you're jogging, not so great if you want to avoid looking like a turnip on the tube.

If you are looking for Apple iPod Nano, there are fabulous Apple accessories already available, with more sure to be available soon.

So I gots to thinking. If there is no off-the-shelf protection for the little friend in my pocket, maybe I could make something? Something that won't cost twenty squids.

Of course my Nano deserves not only protection, but style. So imagine my delight when I found a sweet solution. 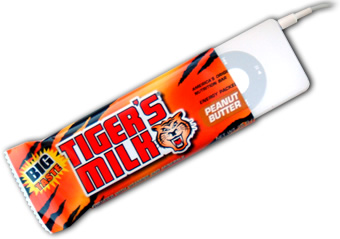 (iPod Nano for illustration purposes only)

Now it's your chance to win one of my fantastic iPod Nano covers, direct from Apple's home in Cupertino. All you need to do is to come up with your own iPod, Nano, Mini or Shuffle cover from any everyday item, post a picture of your creation and the most fantastic (in my opinion) will win the prize.

Post a picture of your creation in the comments.