SXSW was the venue for Ethan Marcotte to announce a new book, Professional CSS. Updated: Also news of a new book by Dan Cederholm.

SXSW was the venue for Ethan Marcotte to announce the up-and-coming publication of Professional CSS, a new book by Christopher Schmitt, Dan Cederholm, Porter Glendinning, Mark Trammell, Dunstan Orchard and Ethan himself. 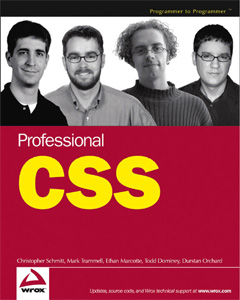 A few months ago I was pleased to be asked by Ethan to help with a chapter on stylesheet switching methods and modern approaches to web design.

Written by leading CSS authors and a team of professional programmers and designers, this book details the techniques of top CSS designers and showcases the real-world Web sites that made them famous.

Each chapter focuses on one designer and a Web site that he or she worked on, documenting the process from start to finish, showing how each designer overcame the site�s unique challenges, and explaining what they would have done differently.

I'm looking forward to see Professional CSS in print later in the year.

You can order it from Amazon right now y'all ;)

You might also be interested to read that I found Bulletproof Web Design by Dan Cederholm on Amazon today... looks like Dan has been holding out on us! ;)