Who best to embarrass in Vanouver? Who is best deserving of the Britpack Union Flag umbrella? Who has been doing fantastic work, sharing it and being an all-round diamond?

So Web Directions North has wrapped and tomorrow we head to the mountains for a spot of cold weather sports activity (or probably in my case, my lips around a nice hot chocolate). But first, other news.

This week has seen another inspiring conference at Web Directions North, and I'll be writing more about the whole experience next week. But until then, a spot of silliness.

It has become sort of tradition over recent events for me to give away something to a member of the audience. Someone who has taught or inspired me, or is simply someone doing amazing work and contributing to web related goodness.

At @media2006, Cameron Adams got his hands on one of my balls. At Web Directions South, Andrew Krespanis was chosen to get hold of my pants (video on YouTube).

Although this silliness is really just designed to allow me to make childish jokes, there is a serious point. I know I'm not alone in getting a tremendous amount back from speaking at these events and from spending time with people who are clever, funny, talented and inspiring.

So this time, Jeremy Keith and I decided to make the award official and from now on it is to be known as the Britpack Diamond Geezer Award. Awarded to someone who we Brits think is a diamond, a geezer, sound as a pound.

And who best to embarrass in Vanouver? Who is best deserving of the Britpack Union Flag umbrella? Who has been doing fantastic work, sharing it and being an all-round top bloke? 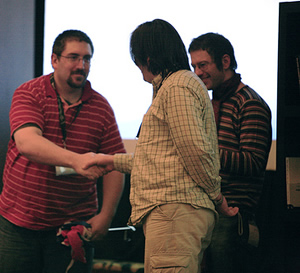