One of my first columns way back in May last year was about creating colour palettes from only two colours plus black and white. So imagine my delight when I discovered an extension to my favourite web graphics application which builds colour palettes using a very similar technique, right there inside Fireworks.

Some of you may remember that one of my first (and most visited) columns way back in May last year was about creating colour palettes from only two colours plus black and white. For those that missed it then, here is a quick recap on one of my favourite techniques.

The Return Of The Los Palmas 7

When I am designing a colour scheme for a client site, I am often lead by the colours used in existing logos or publicity materials as clients want to see the web site 'fit' within their company style. But when the client only uses one or two colours, I use a favourite technique for creating a whole range of complimentary 'tones'.

I start by making a white Fireworks canvas (usually 250 x 100px) and then adding a 250 x 50px black rectangle to the base layer.

Then I sample one colour from a logo graphic, or from a photograph, and create two 50 x 50px squares which I fill with that colour. These are placed over the black and white bases. I then duplicate these squares and adjust the opacity of each square (usually 100%, 75%, 50%, 25% and 10%) to allow progressively more of the base colour to show through.

This creates ten tones from a single colour and is easy to replicate for further base colours.

Steve Chipman of Slayer Office took my technique and created a fantastic online tool which we also use in the studio on a regular basis. Steve took the concept of Creating Colour Palettes to a new level with some interesting twists and clever scripting.

Regular readers might have guessed at my love for Macromedia Fireworks. So imagine my delight when I discovered an extension to my favourite web graphics application which builds colour palettes using a very similar technique, right there inside Fireworks.

Ukranian developer Viktor Goltvyanitsa (I hope I pronounced that correctly) has developed a Windows Fireworks extension, aptly named Color Palette v1.2. The free trial version adds an extra suite of colour tools to Firework in a mini-palette to sit in your side bar.

In the Selector, along with the more conventional colour picker is a very handy tool for Web Safe colours. Simply select a colour from the picker and the extension will serve up a side-by-side comparison with the nearest Web Safe colour.

The full (paid for) version adds colour support for HSV, RGB and CMYK as well as the standard HLS. 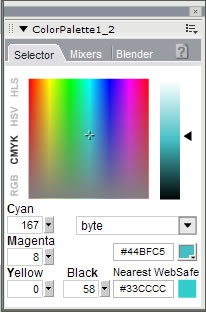 Blender takes two colours and blends them seamlessly together in up to twelve steps. Mousing over each colour gives a hex read-out of that colour.

Perhaps the most interesting part of this extension is the Mixer which enables you to work on creating two palettes with a range of new tools including one very similar to my technique which overlays up to four chosen colours over white. Chromatic variations can be made with an added colour wheel tool and the resulting swatches can be exported either as separate swatch files, or as colour tables (.act format) for importing into Fireworks or Photoshop. The paid for version also includes a 'replace with palette tool'. 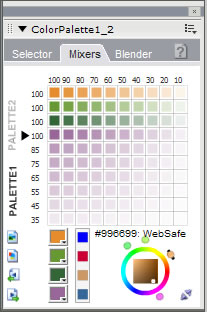 A free Lite version of Color Palette v1.2 is available free and is well worth a look. Hope this helps.

With today's news that Adobe is to buy Macromedia, all I can add is, Buy Fireworks while you still have the chance.