As with all good thrillers, I want to find out what will happen at the end.

Actually I would imagine that most people (who don't dissolve on contact with daylight) find W3C documentation rarely very thrilling. I must confess that personally I read it with all the enthusiasm of a man watching concrete being poured into his boots, and it's even rarer that I understand more than 50% of it anyway. But as someone who tries to keep <div>s and <span>s to a minimum, I am very interested in the (as yet largely unimplemented) potential of that snappily titled CSS3 module: Multi-column layout. W3C Working Draft 15 December 2005, the ability for content to flow from one column to another and how the number of columns can vary within liquid layouts.

Plus, as with all good thrillers, I want to find out what will happen at the end.

Back in September 2005, that mysterious Frenchman Cedric Savarese introduced the CSS3 Multi-Column Module at A List Apart and PPK and Eric have also discussed the latest Firefox release's support for a subset of these (multi-column) properties*. Now there's a new draft and unfortunately it's still only Moz/FF which currently supports any part of CSS3 columns.

What's interesting is the ability for content to flow from column to column and for new columns to be created as the browser window expands, fantastic stuff. But from both design and readibility perspectives the results of this re-flowing can be very unsatisfactory, often resulting in content which becomes separated from its headers or images which become separated from their descriptions or associated text.

Fortunately there are a group of properties which determine where column breaks occur (for example above every <h3>),

but these themselves could have unforseen design issues including the introduction of large amounts of additional white-space or uneven column lengths.

To increase readibility and 'balance', two new properties have been introduced, column-gaps and column-rules. According to the Working Draft,

Unfortunately, the current Working Draft allows for only basic styling of column-rule including 'dotted' and 'dashed' styles, plus the unusably ugly 'ridge' and 'groove'. Hardly a thriller. Nowhere does it seem planned to implement what I imagine many designers would like to use, image rules. I can think of many instances where images would be the perfect choice for column-rules.

I think that the following (familiar) syntax might be appropriate.

Even better would be the possibility of positioning those images as we can now do with background-image in CSS2.1 to allow us to position our rule images either at the top, bottom or vertical center of the column-gap.

Back in the W3C Working Draft 22 June 1999 (Ed says: Good heavens Malarkey, have you been to geek school?), there was a property which seems to have vanished to the bottom of the river in a concrete overcoat. That sad property was the column-span.

This enabled elements (for example <hx>s) to span a designated number of columns to create the effects we commonly see in newpapers. I can see how difficult that might be to implement and control, but the latest draft is severely lacking in a way to 'stop' and 'restart' columns with elements such as <hx>s and <div>s. I'll show you what I mean. 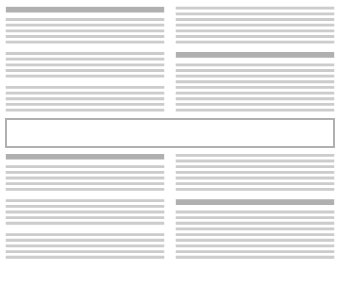 Perhaps something like this could help achieve that effect?

Pedal to the metal

I'm definately thrilled by certain aspects of CSS3 columns, but underwhelmed by others. I also don't think that the current Working Draft goes anywhere near far enough to meet the needs of modern designers. If CSS3 is going to be the revolution that I hope it will be then I believe that designers need to speak out and become involved in creating the specs. At the same time I hope that those at the W3C will actively solicit the help of creative designers to help them understand what we need now and into the future.

I also hope that those who are involved in creating specs such as this should recognise that a little haste would be nice. The CSS3 spec has been proposed since June 1999 and little has made it into the real world save for the efforts of those forward thinking people on the Apple Safari and Mozilla teams. With Firefox raising the bar, Microsoft working hard to improve Internet Explorer and thousands of developers worldwide using CSS every day, isn't it about time the W3C took off its cardigan of academia and joined in the Web2.0 buzz?

I'm sure that CSS3, including the CSS3 module: Multi-column layout will have a happy ending. I'm just not certain we can wait that long to find out.