An experiment in developing a fluid/elastic XHTML layout with minimal markup, CSS2 and a sprinkling of DOM scripting magic.

I'm very lucky. I get to work with some great clients and I'm currently working with a very cool consultancy company. Part of the brief was to do something which no one in his industry had done before and I wanted this to involve code as well as design. I'm off travelling at the weekend and And All That Malarkey will be in the careful hands of three guest authors while I'm away (Peter Roxburgh, Patrick Lauke and Bruce Lawson).

But to say au revoir I thought I share some of the interesting stuff that might be going into the site.

First a sneak preview of the design 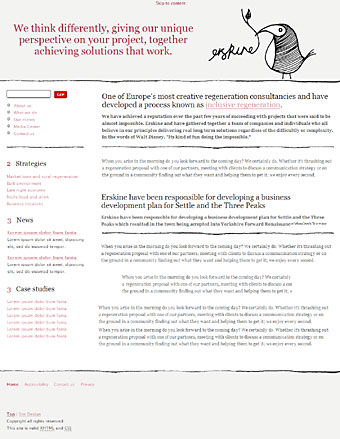 I intended the site to use a liquid layout with an elastic side column. A little negative margin trickery always does the job nicely.

Here's a look at the first example.

With no ids in the document the first task was to hook in my CSS rules to generate the layout structure. Here a combination of,

In all CSS2 capable browsers, the second example works a treat.

Of course Internet Explorer currently does not support any of these selectors, but I am now reaching a point where I believe that we need to move forward with modern browsers by using modern methods and then provide a safety net for less capable browsers. The safety net comes courtesy of the DOM and a tiny script by Philip Roche which installs id styling hooks only for less capable browsers.

And an equally tiny CSS file gives Internet Explorer what it needs.

Go for your gun

So that's it. A liquid/elastic column layout experiment with the leanest markup I can muster. I'm unsure of the real practical advantages of this technique or whether it over complicates matters. But as an experiment in progressive enhancement I'm impressed at what a little CSS2 and DOM scripting can do.