Half dead with Hicks

While Andy and the other Brit Packers were sipping Frozen Margaritas and munching Tex Mex food, Hicks and I were still struggling with getting to Austin at all. I left my house at 6.00am (WalesTime) at headed for the 10.30am American Airlines flight from Manchester to Chicago. (Hicks was coming to Austin from Heathrow via Chicago and Dallas.) Flight 55 to Chicago was uneventful as expected and I arrived in Chicago an hour early at 12 noon (6.00pm WalesTime).

The connecting flight to Austin at 2.15pm but was delayed until 4.45pm because of snow, so I settled down with the iPod for forty winks only to find when I woke up that the flight had been cancelled. Bugger!. The next available free seat to Austin was at 9.15pm but finally left Chicago at 12 midnight (6.00am WalesTime), by which time I had been travelling for 24 hours. Still, the taxi ride to the hotel was fairly short and by 3.30am (9.30am , I was safely tucked up in bed in North Austin. 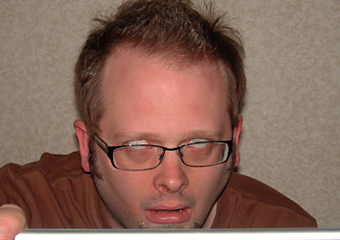 Well Jon arrived at 8.30 this morning (minus baggage) after being stuck in Dallas overnight. Currently, he's hanging around the hotel waiting for his luggage to be shipped from the airport.

We'll be meeting up with The Magnificent Eight later in the day, so if you see what appear to two extras from Shaun of the Dead shuffling vacantly around down-town Austin today, you'll know it's us.