(Ed says: Enough of politics Malarkey, this blog is about design!) I usually refrain from commenting on other designers' work but in this case I thought I'd cast a critical eye on the design of a few UK political party web sites.

With less than a month to go until the General Election, here in the UK you can't seem to get away from inanely grinning politicos squeezing palms and kissing babies for the cameras. Hell, if Alex was still of a kissable age, I'd be locking him in the house until May 6th! (Ed says: Enough of politics Malarkey, this blog is about design!)

Without dwelling on political agendas, negative campaigning or the relentless sniping at the opposition (Ed says: I've warned you once!), I have so far been dictinctly underwhelmed by the design quality of the party's campaign materials. Now I usually refrain from commenting on other designers' work (unless I'm awarding a Web Standards Awards star) but in this case I thought I'd cast a critical eye on the visual design of a few UK political party web sites. I started by getting a bunch of links from the BBC election site. 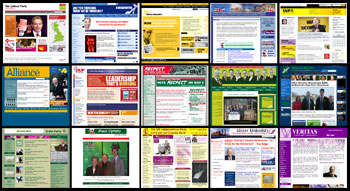 It's clear from the montage that as expected the main parties have poured more resources into their campaign sites and the results are infinately slicker than minority parties with lesser access to donor millions. The three main national party sites (Labour, Conservative and Liberal Democrats) are all more finely honed, although the LibDems site still retains an almost charming understated feel. In contrast, among the minor parties all retain a happy activist look and lack both the gloss or attention to detail found on the major sites.

Aha! I hear you say, But quality comes at a price. Well while this may be true, but I would have hoped that at this time in the political cycle and with many voters dissatisfied with the state of their political representation, that the minor parties would have upped their game.

However large or small their organisations or how deep their pockets, all the sites seem to me to lack that killer punch which I would have expected at such a time. Most seem to focus on the features of their star (sic) players rather than the benefits to us 'customers' of electing them. I've seen more imaginative, well targetted sites which sell washing powder or sofas than I have in this brief look at political parties. Overall, I'm disappointed.

A bunch of links

What do you think? Am I being too critical, too cynical? Have I missed the point? And what political sites have you seen (or worked on) which you feel are great examples of the medium?