As a company, we give each member of the team a �25.00 per month allowance to spend at Amazon on anything they think will benefit the company. We don't vet what people buy, it's a way of encouraging them to expand their knowledge (and our range of skills).

So, it was interesting to see Rachel Andrew's new book, The CSS Anthology, 101 Essential Tips, Tricks and Hacks, sitting on the corner of a desk. Although I've met Rachel, I had not yet read a book that she has authored (Ed: Shame on you Malarkey!) and with the absence of any reviewers' comments at Amazon, I thought I'd write a reviewlet.

With so many excellent books available recently, some of which deal with the practical issues of implementing designs with web standards, I was interested to see how this book compared, particularly against Dan Cederholm's essential Markup and Style Handbook and to what level of designer or developer it might be aimed? 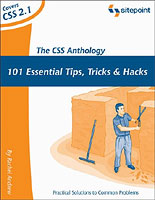 As Rachel herself outlines in the preface, in The CSS Anthology

You won't find pages and pages of theory in this book. What you will find are solutions that will enable you to do the cool stuff today., but should also act as a starting point for your own creativity.

This book is aimed at people who need to work with CSS - web designers and developers who have seen cool CSS designs out there, but don't have the time to wade through masses of theory and debate in order to create a site. Each problem is solved with a working solution that can be implemented as-is or used as a starting point.

Chapter one is aimed fairly and squarely at CSS beginners covering simple CSS implementation such as replacing <font> tags with CSS and basic selectors, although selectors not supported by Internet Explorer are not mentioned. Chapter two moves on to simple styling text with CSS and other styling basics before Chapter three looks into styling of images.

It's not until Chapter four, which deals with navigation, that the book comes into it's own for anyone other than real CSS beginners. And while techniques such as Doug Bowman's Sliding Doors of CSS are missing, the chapter does hint at the potential of techniques including single image rollovers which should leave readers wanting to find out more.

Throughout the middle of the book we are treated to solutions which should succeed in convincing many of the value of styling with CSS, and there are many useful solutions to problems such as <table> and <form> styling (and a sprinkling of JavaScript too) plus some solid mark-up tips. I take issue with some of Rachel's code, particularly the use of <p> tags to group form labels and elements, but overall the advice is solid and well documented.

Later Chapters pick up the pace and tackle CSS positioning and layout with clarity and some solid examples, before rounding off with advice on testing, browser specific CSS basics and some useful cross-browser solutions for problems like rounded corners.

All in all, congratulations to Rachel on a very competent book, well written and with clear, concise examples. I was particularly impressed by the book's 'pace' which serves to engage and interest before diving into more complex examples.

I am still waiting for that 'killer' CSS book, a book which neatly wraps all of the really cool things floating around on web standards blogs, but I think that The CSS Anthology is still a worthy addition to any studio's book shelves.

If you are a regular web standards blog reader, or have been working with CSS for a while, you won't find any revelations here. But if you are starting out with CSS, or like me you need a solid introduction to CSS to give to a new team member, this book is well worth buying.

Buy The CSS Anthology, 101 Essential Tips, Tricks and Hacks at Amazon.co.uk or Amazon.com.