A book for your inspiration collection: Wim Crouwel

To help get web design out of its rut, I think people should broaden their knowledge of all areas of design. So, I’m sharing my collection and recommend this book about the work of Dutch designer Wim Crouwel.

Wim Crouwel was a Dutch graphic designer and typographer. He also designed several typefaces including New Alphabet. If you’re a fan of Joy Division, you might recognise that from the cover of their Substance compilation album. On type, Crouwel said:

“A (type)face shouldn’t have a meaning in itself, the meaning should be in the content of the text.”

Crouwel was influenced by the Swiss-inspired international style, especially the work of Karl Gerstner. I became interested in his work because of the innovative and often unexpected ways he used grids, especially in his brochures and posters for the Stedelijk museum in Amsterdam.

Crouwel and his design studio worked with Stedelijk for over twenty years and built a varied body of incredible work which combined type with strong graphic shapes. Although influenced by the modernist style, Crouwel’s work never feels constrained by it. Even today, much of his work seems experimental and futuristic.

I’ve never seen Crouwel’s name in an article about web design or mentioned at a design conference. This is disappointing, particularly as much of Crouwel’s work combined the emotional and practical aspects of design which are so important for the web. 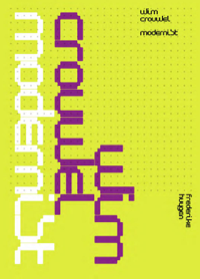 Crouwel died in 2019. Wim Crouwel—Modernist is a monograph of his work by the Dutch art and design historian Frederike Huygen—which was published in 2015—covers his design of exhibition designs in the 1950s, his graphic design work for the Stedelijk Museum until 1985, and the typefaces he designed. It deserves its space on my bookcase, and yours.