Stuff an Nonsense have moved up a floor and I have a new studio space. Trouble is, it's dull and I need your help or suggestions to decorate it.

Some of you may recall that way back in June last year, Stuff and Nonsense grew up, moved away from home and got a place of its own. I wasn't so sure about the move at the time, but (happily) I was proved wrong and it's been a good move. So much so, that we've moved again! This time not into a new building but to a new floor.

The new space allows us to separate design from development from management, gives us more space and more opportunity to grow without outgrowing our space. My problem is my studio, bland or uninspiring just doesn't sum up the space. 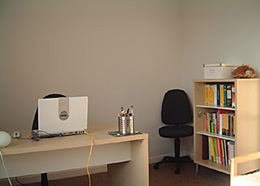 My studio sure needs your delicate touch.

But I don't know what to do. Plants, pictures... I simply haven't got a clue. So, I thought I'd leave the decoration up to you. Tell me what you think I should do, or decorate the place for me.

Here is a ZIP containing layered Photoshop image of my space (990Kb). Do with it what you want and then post the picture here, I've enabled images in comments for this column.

Now, out with the overalls!