Empire Hotel: Then and now

In (probably) my last column before a two week break starting Saturday, I thought I'd reflect on the changes that my work has gone through during six years of making sites for the same client.

This is likely to be my last column before I take off for France on Saturday for a two week holiday with Sue and Alex.

We have just completed a small site redo for a long standing client, the Empire Hotel in Llandudno, North Wales. We have had the pleasure of working with the Empire Hotel for almost as long as we have been in business. And while this project was not a large one, I was keen to give it my best attention.

The hotel itself has changed very little in the last six years, the web site however has changed enormously! Working with the same client for a number of years has made it possible to examine the differences in my techniques and thinking between then and now.

Technically, today's site is a million miles different from the site I made in 1999 which lumbered visitors with three levels of JavaScript before any content was visible. First came a JavaScript which checked for a screen resolution over 800x600 and bounced 640x480 users to a warning page proclaiming,

Polite notice - your monitor screen is set to only 640x480 pixel size. In order to view this site, please resize your monitor resolution to a minimum recommended 800x600 pixels. Consult your computer, graphics card or monitor manual for instructions on how to do this. We are sorry for the inconvenience.

If this wasn't rude enough, the next page checked for the Flash plug-in and a further one detected the browser type. A poor soul not using Internet Explorer 4 (the best browser on the planet) would get this little pearl of wisdom.

Sorry, this site can only be viewed in a web browser of version 4 or later due to the advanced techniques used. If you are using Microsoft Internet Explorer 3.0 or earlier, or Netscape 3.0 or earlier you should upgrade now and make your web browsing a more special experience.

(ed: Isn't that hilarious? In those days, upgrading to Netscape 4 would give you a 'special experience'...) 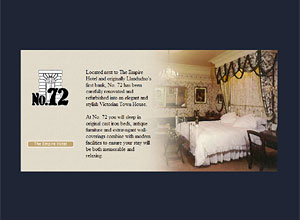 If by now I wasn't sobbing with embarassment, I might find it funny to remember that the first page that a visitor actually 'saw' was, wait for it... a Flash 'splash page'! And the best bit of all? The whole site sat in a 'letterbox' frameset consisting of no fewer than six frames!

Strange though it might seem (I really appreciate it if you're reading this Elyse), we were asked to make a new site for the Empire Hotel in 2002. This time, out went the paranoid JavaScripts and frames (a splash page still remained) and in came a basic CMS built on a simple Access database and a Java based 'virtual tour'. Looking back now, the Java took longer to load than a weekend in Llandudno and I bet no one ever got beyond the reception. 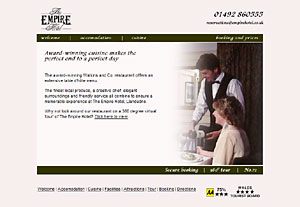 Although stuffed with spacer GIFs, rollovers and Dreamweaver 3 scripting, the site wasn't bad looking for the period (as seen above) and was very indicative of the work we were doing at the time.

What a difference a few years make. Today's site is valid XHTML, CSS and faster than ever before. There is still Flash on the home page courtesy of Todd Dominey's excellent Flash slide show (although different mark-up to Todd's is used to ensure that the page validates), but the Flash is used sparingly and only on one page.

But the major difference is not in the technicalities, but in my whole approach to design. Today's focus is on usability, accessibility and content; three areas that would not have occurred to me in 1999. I have tried to make the home page functional AND stylish, offering more information and navigation than on the whole of the 1999 site put together.

It is strange to know that however attrocious the previous sites were, no one ever complained. The sites lasted for years and despite their obvious faux-pas, the Empire Hotel did (and continues to do) good business. Many of the visitors come from overseas and many have had their first look at the hotel on the old web sites.

I hope that this time I may have got it more right than before and that from today I will reward the client's loyalty with a site that will do better business than ever before. They have embraced the idea of standards and accessibility, even going so far as to write a special page about physical access to the hotel. I wish that all my clients would take accessibilty on board with such vigour. My only regret is that the secure booking pages are not yet standards based or accessible. These pages are (so far) outside of our control and I hope that the company responsible will take our wishes to heart and let us help them redesign the front-end.

Have you got any old sites still 'lurking' that you want to get off your chest?