Maybe I'm out of step with the fashion, but I would love to see flat colours and gradients give way to more visual richness and depth.

Last week I came back from a (semi) working trip to New York. As it's been nine years since I was last in the city, I did all the usual tourist attractions (Empire State Building, Circle Line cruise, Central Park) and I ate hot-dogs and donuts and bagels and pretzels; rounding it all off with a visit to MoMA to see a painting that I have wanted to see in the paint for over twenty years: Jasper Johns' Flag. 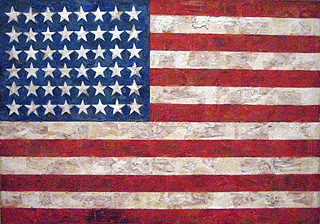 I'm not sure why this painting has cast such a spell over me for so long. I became a fan of Johns when I was at art school and I think what attracted me to his work, and others in the pop-art movement, was the strong, graphical shapes and bold colours. Reproducing large paintings like Flag in art books can often reinforce the graphic nature and it can be difficult sometimes to appreciate the depth of the layers and three-dimensional effect of the paint. 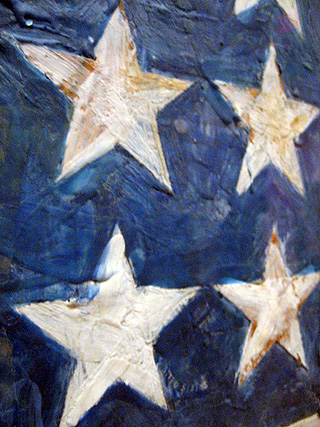 Seeing Flag up close, pushing my nose as near as the gallery attendant would allow, gave me a totally different appreciation of the work. It is a complex mix of paint and collage, with cuttings from newspapers showing through the layers of paint. Rather than being flat, Flag has real texture and a wonderful three-dimensional quality that has inspired me to bring a little of its richness into my designs. 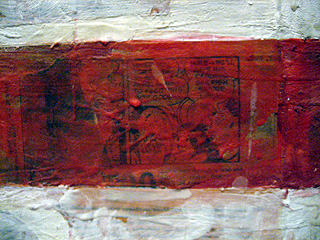 I think that the idea of layering design elements on the web by using semi-transparent PNG images to create these types of effects is really exciting as I'm bored by the cute-and-cuddly, Web 2.0 design trends that so many clients seem to be asking for. Maybe I'm out of step with the fashion, but I would love to see flat colours and gradients give way to more visual richness and depth.