I've been aching to write about Measure Map, the first product from those cool hombres over at Adaptive Path. Now that Jeff Veen has written about Measure Map today, I can hopefully prevent my sides from splitting with gleeful excitement by writing about this little Treasure (Measure) Map.

Measure Map is a Web application that helps people get to know their blogs. We do this by collecting and analyzing blog-specific traffic statistics and presenting them in a browsable interface that encourages exploration. It is an experience that offers meaningful insight into the effects caused by small changes in how you blog, rather than the overwhelming complexity of most web stats tools with their query/report-style analytic methods. Measure Map provides understanding by refocusing the difficult problem of web statistics and solving it just for blogs.

Measure Map and Me

I take a cursory look at my stats every now and again, usually to glance through overall numbers and browse referrers, but I'm not a stats junkie. Well, until now. I've been using Measure Map for this site since I came back from San Francisco. Installation wasn't simple, it was super simple, taking somewhere between 20 and 25 seconds. (OK, that might be a slight exaggeration, but how long can pasting two Javascript snippets into two MT templates take? ;) )

Measure Map's interface is simplicity itself, but encapsulates a sublime mix of Web 2.0 technologies. CSS, AJAX and a cleverly appropriate use of Flash all combine to give me just the right information I need about my site. The interface is divided into information about visitors, links, comments and posts, all updated and presented in real time, rather than the once daily updating of my regular stats.

The Visitors window gives details of visits to the site over any given period, handily selected by a nifty Flash date range slider. The information is instantly updated by AJAX and shows total vistor numbers and the percentage of repeat visitors. 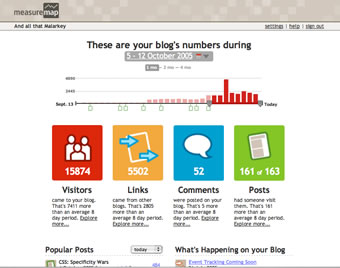 The Links window is particularly addictive and shows details of both referring links and external links to other sites. This has been particularly useful. I've been noticing a large number of referrals from Google searches for iPod nano covers over recent weeks (due entirely to my column about my homemade nano wrapper). I decided to experiment by placing prominent links to Amazon's iPod nano pages at the top of that column. Measure Map not only helps see easily which searches visitors are making to land on my site, but I can keep track of those leaving my pages to Amazon. Something which would have been much more complicated before Measure Map. 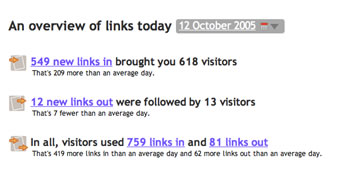 The Comments information needs little or no explanation, doing everything you would expect in detailing replies to my articles, but Posts is engaging in showing at a glance which columns are attracting the most visitors. I've been pleasantly surprised that many columns which I had forgotten that I had written still attract visitors, and Measure Map neatly presents not only how many visitors these columns received but which links they followed in and out. 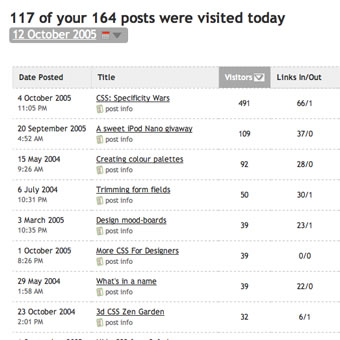 I've got a smallish wish list of improvements and of course no application is without its faults, particularly in the early stages, and Measure Map is no exception, due mainly to AJAX's interaction with the browsers' Back button, but minor AJAX induced irritations aside, Measure Map is a treasure.

We'll be opening the doors soon, probably towards the end of the year. For now, we're metering our growth with an invitation system to ensure that we can provide an appropriate level of service for our users as we grow. You can sign up for one at measuremap.com.

My advice? Even if you sign up instantly, it ain't soon enough. This one is special.