I wrote a little while ago about the UK Labour Party's early campaign posters. So, I thought I'd take a look at what the Conservative Party is hoping will grab our attention and make us vote for them.

I wrote a little while ago about the UK Labour Party's early campaign posters and now with the democratic process well underway here, I thought I'd take a look at what the UK Conservative Party is hoping will grab our attention and make us vote for them.

Any good sales-person will tell you, only ask open questions. So, don't ask Can I call on Monday?, ask Would Monday morning or afternoon be better for you?. It seems as if this simple technique has been overlooked by Tory campaign managers, as their main campaign message,

Are you thinking what we're thinking?

is a closed question, leaving voters with the option to say No as well as Yes

I'm probably the only geezer here who can remember the Conservative's (now famous) Labour Isn't Working campaign by Saatchi and Saatchi, which is often credited with winning them the General Election in 1979 and began the start of almost twenty years of Tory rule. Brilliant in it's simplicity, the campaign was a stroke of genius and caught the mood of the nation.

In 2005 and after eight years out of power, the latest Conservative campaign has none of the imagination of 1979, concentrating on purely negative messages. From a design perspective too, I think that the posters are distinctly lack-lustre. 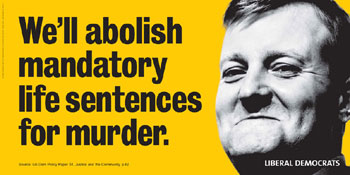 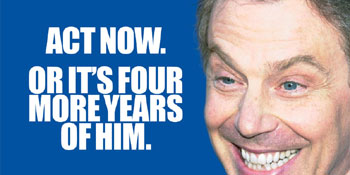 Still, who am I to judge? Over to you.