A book for your inspiration collection: Richard Hollis

To help get web design out of its rut, I think people should look outside the web to all areas of design for inspiration. There’s so much we can learn from books about editorial, graphic, and print design. So, I’m sharing my collection and recommend this book about the work of British designer Richard Hollis.

Born in London in 1934, Richard Hollis is a British designer and teacher, and author of several books on graphic design. Throughout his long career, Hollis has built an enviable and substantial body of creative work and has educated younger designers through his writing.

I need to confess that shamefully I only discovered Hollis and his work a few months ago, while learning about David King. Hollis was credited by King and many other designers of the time as influential, but it’s only in the past twenty years that his work has received more widespread attention with the book about his designs for the Whitechapel Gallery and an exhibition in 2012.

Hollis was influenced by the modernist Swiss style but his work hasn’t been defined by it and in many ways feels very British. Alongside his teaching at London College of Printing and Chelsea School of Art in the early 1960s, Hollis produced work which reflected his interests and outlook. He made work for CND—which I was a member of in the 1980s—New Society magazine, and Pluto Press, a left-wing publisher. For Hollis, content and message are more important than a designer’s distinctive style. He said:

“ The ideal situation is where you sit with the client and design with them. If anything is emphasised, it’s what they want to emphasise. So often you’re left with no guidance as to what to give prominence to. I much prefer collaborative effort to doing what I want to do. It’s diametrically opposite to being an artist. Artists are free to put things into any form they like, which may or may not be comprehensible in the way they hope. For me, working with the person whose message it is is the most comfortable.”

But that approach didn’t mean designers should be subservient to their clients. When asked about clients who say “Move that type a little to the left… now let’s see it in green…’ Hollis replied, “I’d tell them to fuck off.”

As well as his design work for clients, Hollis wrote two influential books on graphic design: About Graphic Design and Swiss Graphic Design: The Origins and Growth of an International Style. It’s his work for the Whitechapel Gallery between 1969 and 1985 for which Hollis is most well known. I hope that I can make more people aware of Richard Hollis by sharing my fascination for him and his work. 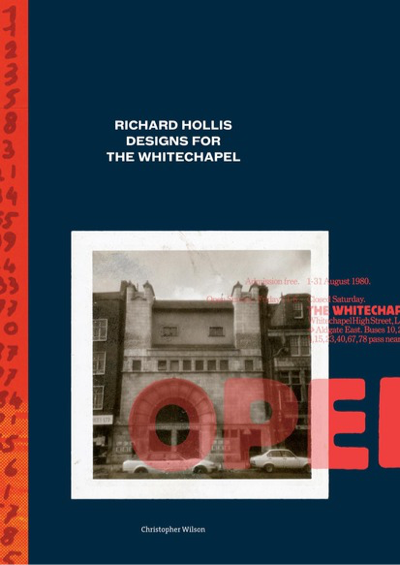 “Richard Hollis Designs for the Whitechapel” by Christopher Wilson is a fascinating exploration of Hollis’ work for the Whitechapel Gallery between 1969 and 1985. If you haven’t bought a design book this week—and even if you have—this book deserves a place in your inspiration collection.