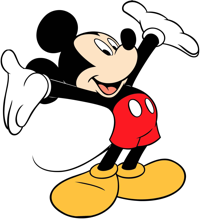 Day one: A skip through some of the markup and styles I used on the 2004 Disney Store UK store.

One of the things that I found fascinating then about working with CSS was the application of new techniques to solve the real dilemmas which crop up during a site build. On a commercial site there are different pressures than on say a personal site where the decisions that you make are your own.

But there were only rare occurrences these days where tables beat CSS, and standards-based sites need not lack the visual appeal that brands like Disney rightly demand. Understanding this, our client pushed us to find solutions that (I hope) work well. So hats off, plus links to the far cleverer than me people who dreamed up answers to the questions that this site redesign posed. Let’s look first at the home page and other components common to all pages.

The ‘More Disney Magic’ toolbar was a Flash movie—over which we had no control—fed by a JavaScript from another server, allowing Disney world-wide to update multiple sites from a single source. For accessibility, I added a <noscript> content and a hypertext link to accommodate browsers without scripting or Flash enabled. We also wrapped the toolbar in it’s own <div> and added a title attribute to warn customers about a possible change in the ‘active’ window.

One concern I had was the latency between the loading of the page and the arrival of the scripted content. This became particularly noticeable at peak internet usage periods. The solution was to move the <div> containing the script to near the bottom of the source order, then reposition it at the top visually with CSS.

Then the page rendered before the script was called making the page appear to load much faster. When embedding the Flash header, Drew McLellan’s Flash Satay method came to the rescue, boiling down the code and giving me back valid markup.

I also provided a static version of the branding image for people who hadn’t installed the Flash plugin.

It was interesting to learn more about how large organisations trade links between separate parts of their business. On this site, those links were found near the bottom of each page. I evaluated several different methods of inserting these links, including straight-forward image links:

In the end I plumped for a simple unordered list:

Position anchors in a pseudo imagemap

I took exactly the same approach with the assets which dominated the centre of the home page.

IE5 Mac and no whitespace

We I encounter a bug and found no way to fix it. The ecommerce system output XHTML without whitespace. This was fantastic if you want to forget about IE PC’s whitespace bug, but here it broke Dave’s shiny Sprites. The lack of whitespace between list items also made IE5 Mac collapse the list, breaking the layout. My solution was to hide the list from IE5 Mac with a little CSS slight-of-hand in the form of the Commented Backslash Hack:

Next I’ll run through the accessibility decisions I made: